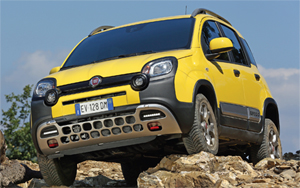 If good things come in small packages, then look no further than the Panda 4×4 if you are looking for a capable city supermini that doubles as a surprisingly capable off-roader. It’s such a good package that one could have forgiven Fiat from leaving it alone, apart from the odd ‘paint job’ allowing the company to create some daft named ‘specials’. The good news is that despite the bright yellow paint job shown here, the latest Panda 4×4 Cross is anything but daft; it’s a capable small off-roader that has just got serious.

Regular readers will know that we rate the Panda 4×4, and have done since its first incarnation back in the 1980s. It was unique in the 4×4 market back then, and the latest version continues that tradition. Indeed, we awarded the latest version our ‘Best Mini 4×4’ in our annual ‘4×4 Of The Year’ last year. It’s pleasing, therefore, to be able to say that the new model, available in the UK at the end of this year, has received some significant upgrades, specifically designed to improve the vehicle’s off-road abilities. And it’s not very often that we are able to report that, especially when talking about a small SUV.

Of course, you might be forgiven for thinking that the new Panda 4×4 Cross has just been tarted up and given some bright paint options. Visually, the first thing you notice is the chunky new front bumper finished in what is described as ‘ultrashine’. More acceptable but less obvious is that the corner panels of the Panda are actually scratch and bump resistant. Underneath, the Panda has a new skidplate protection, which is actually steel, designed to work rather than just look good. The LED daylight running lights are located in protective recesses. Cross badging is on the door inserts and the exterior looks are finished with new 15inch alloy wheels.

Inside and there are some changes in trim. To be honest, the Panda 4×4’s interior is a matter of taste, the modern/retro look is not to everyone’s taste, but there is one addition that does impress. The new Panda 4×4 Cross now has its own Terrain Control.

The Panda’s 4×4 system is a torque sensing on-demand operation, as found in the majority of ‘soft-roader’ SUVs. Adding a Terrain Control, albeit a very simple one, takes the Panda one step above such automatic and often anonymous SUVs. The system has three modes. Firstly, and for the majority of the time, it sits in ‘Auto’ mode, which on dry tarmac roads will mean that 98 per cent of the drive will be to the front wheels, making it a FWD supermini. Changes in grip, when the road gets wet or icy, means that the torque distribution of the electro-hydraulically controlled, multi-plate centre diff will distribute drive where needed – and that could be 98 per cent rear-wheel drive if the conditions demanded it.

The second mode switches the Panda to ‘Off-road’, which ensures that the Panda is permanently in four-wheel drive for speeds up to 30mph. The Electronic Locking Differential is engaged, traction control is disengaged and for slippery terrain of snow, ice, gravel or mud, the Electronic Stability Control system is employed to brake slipping wheels, thus transferring the engine’s torque to those wheels with the most grip. 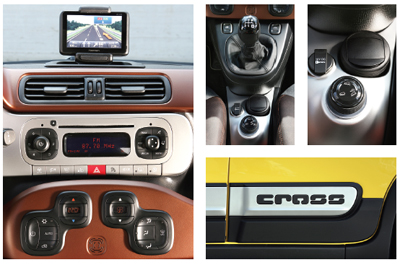 The third option on the Terrain Control is the Hill Descent Control, which activates automatically when the speed drops below 15mph, employing the traction control and the ABS brake system to maintain a constant speed during unpredictable levels of grip. This is an interesting development. It’s unlikely that Fiat would have gone to the expense of developing a separate hill descent option just for the Panda, had they not already got all the expertise within the company – thanks to the acquisition of the Jeep brand. This is certainly one area where Jeep’s off-road pedigree is directly improving the Fiat model range.

The TwinAir version has the six-speed gearbox, with the shortened first gear allowing the vehicle to crawl on tickover – aiding its abilities when off-road. At the time of writing, we have not been able to test out the Panda’s new Terrain Control system, but we will let you know as soon as we do.

The Cross also has larger tyres than the standard Panda 4×4, benefitting from 185/65R15 M&S options. When these are fitted to the specific springs and redesigned bodywork, the ground clearance is raised to 161mm for the TwinAir version and 158mm for the MultiJet turbodiesel engine version. The vehicle’s engine air intake has also been raised for both engine models, improving the Panda’s wading ability. Add to that an approach angle of 24 degrees, departure angle of 34 degrees and a breakover angle of 21 degrees, figures that lead the company to claim that this means the Panda 4×4 Cross will tackle a maximum gradient of 70 per cent and lateral gradients of up to 55 per cent; not bad for a small, supermini, ‘city’ car!

While the engine options remain the same, they have been uprated. The intriguing little 900cc TwinAir turbo engine now has 90bhp (up from 85) and 145Nm (107lb ft) of torque. This means a 0-60mph time in around 12 seconds, and a claimed top speed of 104mph, while offering a combined fuel economy of 57.6mph and CO2 emissions of 114g/km.

The 1.3-litre MultiJet II turbodiesel engine also gets a boost of five bhp to 80bhp, but more significantly the torque with this engine is 190Nm (140lb ft) at only 1500rpm. The addition of the turbo and intercooler adds weight and the larger engined Panda 4×4 Cross is actually slower than the TwinAir, reaching 60mph after around 14 seconds, and with a top speed of 99mph. Emissions for this engine, Boris please note, are 125g/km.

The Fiat Panda 4×4 Cross will be available in the UK at the end of this year, priced at £15,945 for the TwinAir version (our choice as it happens) and £16,945 for the turbodiesel option. We look forward to getting our hands on one. Small is definitely interesting when it comes to Italian 4x4s, and this is just before the eagerly awaited Jeep Renegade breaks cover next year. Matching these two mini 4x4s up will be interesting, and then we could add in a Suzuki Jimny…