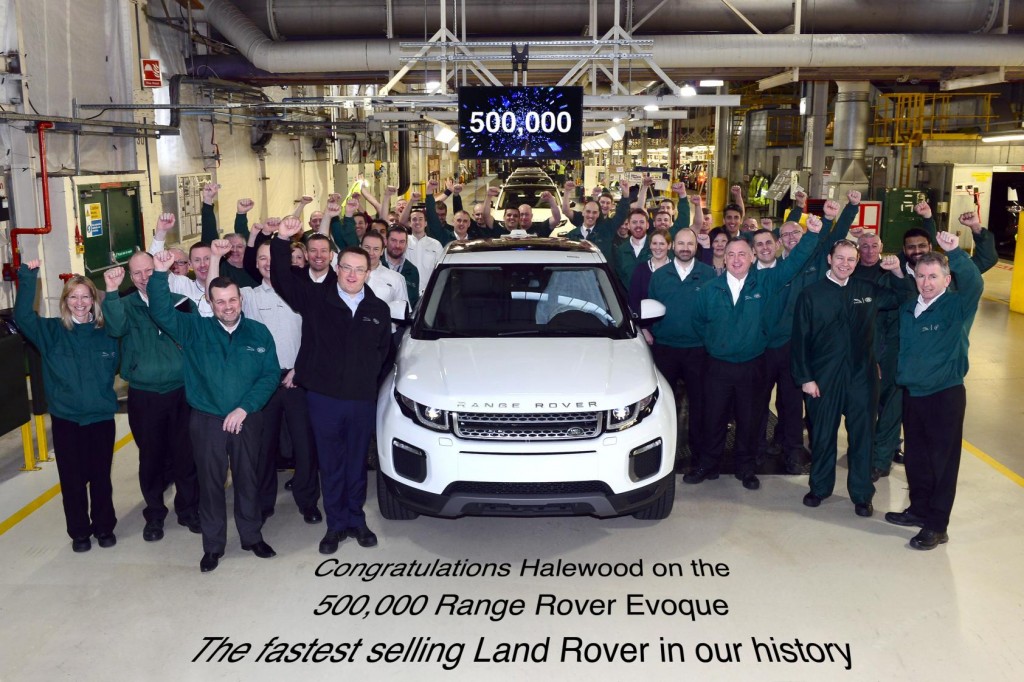 Land Rover is celebrating the production of its 500,000th Range Rover Evoque at Halewood, just over four years after deliveries of the luxury compact SUV commenced.

Evoque is the fastest-selling and most successful Land Rover ever produced, having become the quickest to reach the half-a-million vehicle production landmark.

One in every three Land Rovers sold around the world is an Evoque and strong global demand ensures the production line at Halewood is in operation 24 hours a day, with a new vehicle coming off the line every 80 seconds.

Gerry McGovern, Chief Design Officer, Land Rover, said: “Evoque has been a huge success for Land Rover winning more than 165 international awards, bringing new customers to the brand and evolving to stay ahead of the competition. With our bold new Evoque Convertible we have broadened the range and will attract even more new customers to the brand.”

The completion of the 500,000th Evoque is the latest in a series of Land Rover production milestones achieved recently. In April 2015, Land Rover celebrated its 6,000,000th vehicle sold – a specially manufactured Range Rover Vogue SE LWB fitted with unique puddle lamp designs to mark the occasion.

In June 2015, Land Rover marked the 2,000,000th Series Land Rover and Defender vehicle with a bespoke model assembled by key figures from the legendary 4×4’s past. It was auctioned at Bonhams auction house in London, UK, on 16 December to raise funds for International Federation of Red Cross and Red Crescent Societies and Born Free Foundation, fetching £400,000 to be shared equally between both charities.

First UK customer deliveries of the new Evoque Convertible will be in June this year with prices starting from £47,500 for the HSE Dynamic.