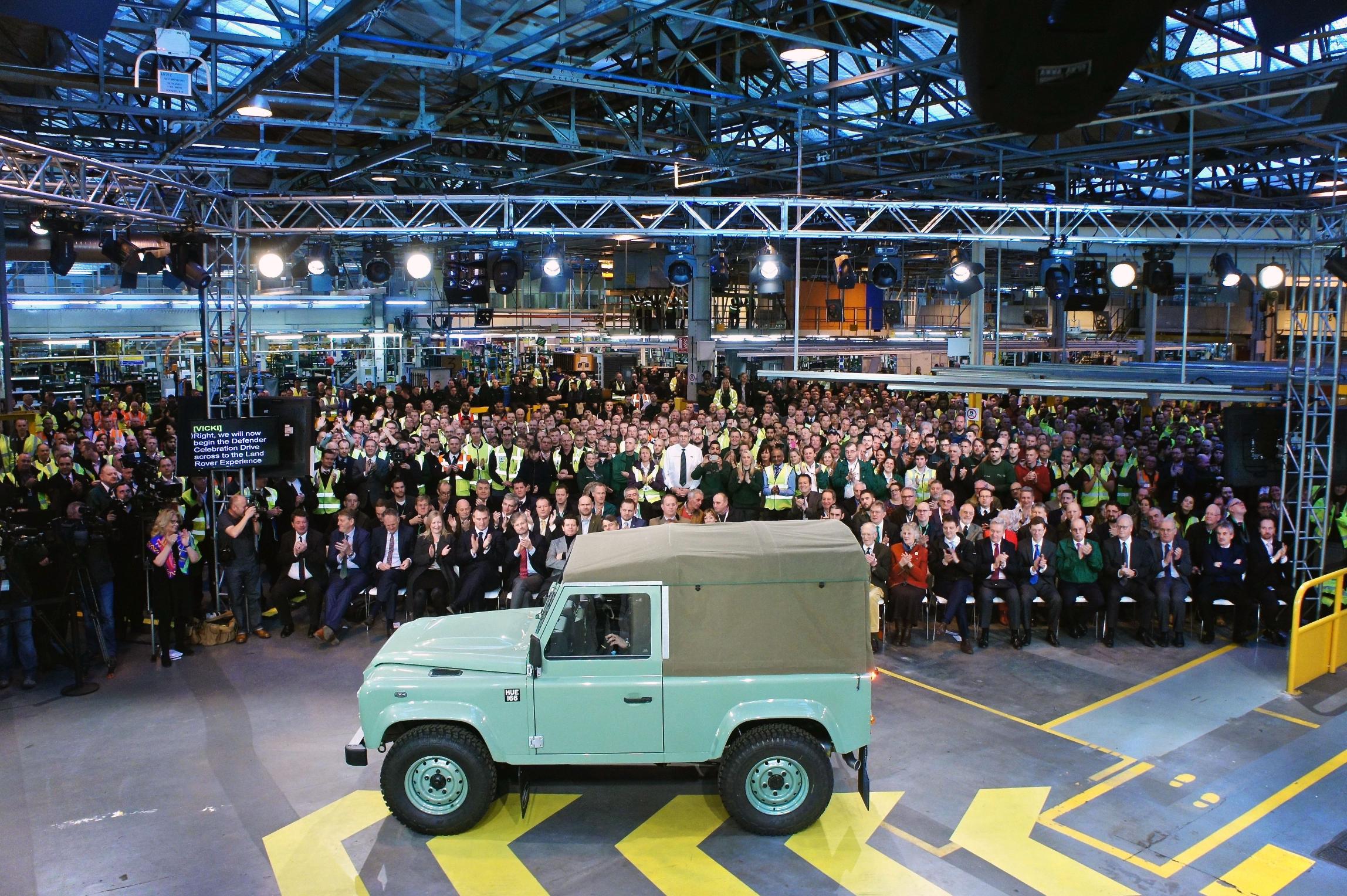 Land Rover celebrated 68 years of history as the last of the current Defenders was produced at its famous Solihull production facility.

To mark the occasion Land Rover invited more than 700 current and former Solihull employees involved in the production of Series Land Rover and Defender vehicles to see and drive some of the most important vehicles from its history, including the first pre-production ‘Huey’ Series I as well as the last vehicle off the production line, a Defender 90 Heritage Soft Top.

At the same time, Land Rover announced a new Heritage Restoration Programme, which will be based on the site of the existing Solihull production line. A team of experts, including some long serving Defender employees, will oversee the restoration of a number of Series Land Rovers sourced from across the globe. The first vehicles will go on sale in July 2016.

Dr Ralf Speth, CEO of Jaguar Land Rover, said: “Today we celebrate what generations of men and women have done since the outline for the Land Rover was originally drawn in the sand. The Series Land Rover, now Defender, is the origin of our legendary capability, a vehicle that makes the world a better place, often in some of the most extreme circumstances. There will always be a special place in our hearts for Defender, among all our employees, but this is not the end. We have a glorious past to champion, and a wonderful future to look forward to.”

The Defender Celebration in Solihull saw more than 25 unique vehicles from Land Rover’s history come together in a procession around the Solihull plant, featuring the final current Defender vehicle off the line. Land Rover associates were joined by a number of previous employees from the past 68 years to help celebrate this historic day. The last of the current Defender vehicles includes an original part that has been used on Soft Top specifications since 1948 – the hood cleat. The vehicle will be housed in the Jaguar Land Rover Collection.

Land Rover fans are invited to upload their most memorable journeys ever undertaken in Series Land Rover or Defender vehicles via an upcoming online ‘Defender Journeys’platform. Effectively a digital scrapbook, Land Rover aims to collate as many exciting adventures as possible into this online map, which users can view and share.

More than two million Series Land Rovers and Defenders have been built in Solihull, UK since 1948. What began as simply a line drawing in the sand has gone on to become one of the world’s most iconic 4x4s, earning the accolade of being the most versatile vehicle on the planet, capable of taking owners to the places other vehicles couldn’t reach. In 2015, a unique milestone Defender – the ‘Defender 2,000,000’ sold for a record £400,000 – a far cry from the original £450 the first Land Rover sold for at the 1948 Amsterdam Motor Show.

In 1948, the Series I went into full production at Solihull. Post-war Britain was struggling with a shortage of steel, though aluminium was in plentiful supply for the bodyshells and the country had vast manufacturing capacity.  Inspiration came from Spencer and Maurice Wilks, two brothers who had helped return the Rover Company back into profitability during the 1930s. They had devised the Land Rover as a vehicle primarily for farming and agricultural use. They could not have predicted the global impact their vehicle would have.

Changes followed and in 1958 the Series II brought about a new design and engine updates, including an advanced diesel engine which remained in service until the mid-1980s. Sales had reached half a million by 1966, while annual production peaked in 1971 with 56,000 units. During the 1970s, the Series III continued to sell as well as its predecessor, a testament to its enduring appeal.

The vehicle earned a new name in 1990 – Defender. By this time, the Land Rover portfolio included the Range Rover and the newly-launched Discovery. A new name was fitting for a vehicle previously only referred to by its wheelbase length and Series number.

Part of the Land Rover’s appeal came from the endless variants that were created off the basic platform, including models as diverse as fire engines, lorry-like Forward Control vehicles, cherry pickers and even an amphibious car capable of floating on water. Over its 68 year history, it has been a vehicle driven by everyone from farmers and famous explorers, to royalty.

For many Defender owners the vehicle has become part of the family, just as on the Solihull production lines where that same family bond has been forged over the years by the workforce.

Tim Bickerton, aged 55, has 40 years’ service with Land Rover having started as an apprentice, following in the footsteps of his grandfather Charlie and father Peter, who clocked up 35 and 30 years respectively working on the same line, both progressing to foreman. Tim was followed by his daughter Jade, aged 25 who worked on logistics and materials for the Defender, before recently moving to another area within JLR. Then last year his 23 year old son Scott became the fifth member of the family to work on the Defender.

Tim, who worked on producing special limited edition Defender models, said: “I am hugely proud of our special family tradition working on this remarkable vehicle. The Defender has become part of our family. We’re like a stick of rock with Defender running through us. The Defender is the vehicle that everyone relates back to Land Rover; it may be seen as a workhorse but we think it has become a real thoroughbred.”

David Smith, aged 56, is another 37 year veteran of the current Defender production line who will be moving across to the Jaguar XE production area. A former butcher he joined Land Rover as a 20 year old because it doubled his wages to £80 a week and gave him a job with long term prospects. “The Defender is a special vehicle and very much hand built. You need to get a feel for it; we call it ‘the knack’ and it takes months to learn the knack. It’s about doing the job at speed, it’s an intense combination of skills. Working on the Defender is like being part of a big family,” he said.