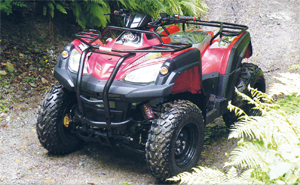 While there are more and more electric vehicles coming to the market, having an electric quad seems a little unlikely because of the size of the chassis, matched with the size of the batteries. The guys at Electric Quad Bikes have had a two-wheel drive electric quad – the Eco Charger Dominator – on the market for a couple of years now, but the really interesting news is that they have now got a 4×4 version, called the Eco Charger 4×4 Eliminator. And very impressive it looks.

The 4×4 Eliminator has the same 20bhp engine as the two-wheel drive version, but it uses 12 small 50amp/h batteries, which have allowed designers Fred Chugg and Graham Jackson to position them around the shaft drive, keeping them low to improve the quad’s centre of gravity. The battery weight actually helps give the quad some beef, and from the test results claimed, this is a mighty little machine.

One of their initial problems was to get the correct gear ratios for the shaft drive (not something that was a problem with the chain drive two-wheel drive version). The Eliminator has a four speed box, high and low ratios, with top gear being a sensible road gear offering around 30/35mph, but it’s off-road that it proves its worth.

Testing the Eliminator has involved some ‘tug-of-war’ competitions with some of the major petrol-powered quads. Not something that you should do at home, perhaps, but the Eliminator did manage to pull ‘well-known’ brands, driving in the opposite direction! If you go to the company’s website, you’ll see this ‘test’ in action. They claim costs of just over 1p per mile, and that a full charge will be OK for 30+ miles, depending, of course, on terrain and usage. Prices start at around £5500, excluding VAT. Check out more at: www.electric-quad-bikes.co.uk