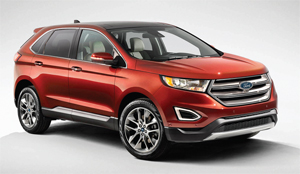 In what is turning out to be one of the longest ‘introductions’ for a new SUV that we can remember, Ford has released more details for the long-awaited (sic) new flagship SUV, the Edge. Bearing in mind that a version of this model has been available in the US since 2007, and that we drove one for a very enjoyable crossing of the Rocky Mountains back in 2012 (reported in the January 2013 issue), the European Edge does seem to be taking its time. This all-new Edge is part of Ford’s SUV expansion plans and will join the medium-sized Kuga and smaller EcoSport to give the company a full range in this 4×4 market segment.

As you would expect from a premium Ford product, the new Edge will certainly have a highly competitive specification. It will be a roomy, four door SUV and should be with us by 2015. It will be fitted with Adaptive Steering, which continually changes the steering ratios depending on vehicle speed, making the vehicle easy to manoeuvre and it is claimed ‘fun to drive’. The Ford Edge will be fitted with the company’s intelligent all-wheel drive torque-sensing system, and come with two engine options, both based on the 2.0-litre Duratorq TDCi turbo diesel engine. One will have 178bhp, 400Nm of torque and emit 149g/km fitted to a six-speed manual transmission, while the top of the range will be the 208bhp, 450Nm version, emitting 159 g/km mated to the six-speed PowerShift automatic transmission.

So, the new Ford Edge will be available in Europe next year, where it will be intriguing to see how it matches up in what has become a highly competitive market segment, but the company is certainly confident. Roelant de Waard, vice president, Marketing, Sales and Service, Ford of Europe has declared: “Over the next five years we plan to outpace the industry growth and more than triple our SUV sales here in Europe. More customers than ever before are buying Kuga, we have very high expectations for EcoSport, and when Edge joins them in our showrooms we’ll have a full family of utilities, all leaders in design, remarkable technology, smart features and real capability.”