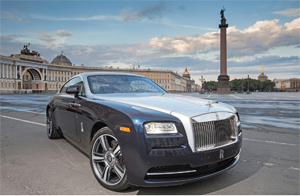 The news that the iconic luxury limousine manufacturer is actively considering building a 4×4 was somewhat underwhelming. Given the market for luxury SUVs, perhaps RR had to be seen to consider the idea. Of course, it was even less of a surprise that, should RR build such a vehicle, it was claimed it would become the most expensive production 4×4 in the world. Now of course it would. Are you listening Bentley?

In a world where the greatest range of British-built 4x4s are owned by an Indian company, the fact that another brand so synonymous with Britain is now owned by BMW shouldn’t really surprise or disappoint. Add to that the fact that Bentley is owned by Volkswagen and you wonder if the comments by Rolls-Royce boss Torsten Müller-Ötvös were made for VW’s benefit – since that German manufacturer has already announced a luxury 4×4 Bentley will be with us in 2015.

BMW does have extensive experience of some very clever high tech carbonfibre technology, and so there would be no problem with the technology to build a 4×4, the question would be what kind of market there would be for such a product? Perhaps the most important comment from the RR boss about this whole story was confirmation that should the company go ahead, any 4×4 Rolls-Royce would be built in the UK, at the Goodwood plant, because of the value that RR customers put on British engineering. It’s just a shame that the profits for such skill will leave the country.

Of course, Rolls-Royce has been involved with a successful 4×4 before… The original Austin Champ was fitted with a RR designed engine. Now that is what you call a heritage.