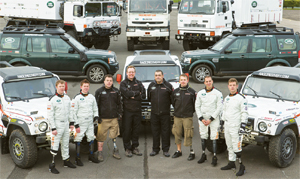 The Race2Recovery team of wounded soldiers planning to enter the 2013 Dakar Rally have been conducting extensive desert testing in Morocco, with help from Land Rover. The Team has completed over 2000kms of driving over a variety of difficult terrain to hone their skills in preparation for the Dakar. Three Land Rover 110 diesels were used for the training programme, which included negotiating boulder fields, wadis, sand seas and razor dunes. Speaking from the Atlas Mountains on the exercise’s final day, Captain Tony Harris commented: “Our four days of training in Morocco have been incredibly productive and will prove invaluable in preparing the team for the rigours of the 2013 Dakar. Driving more than 500km per day in temperatures up to 37 degrees and over 2000 metre high peaks en-route to the desert, with rough camping alongside our vehicles for three nights, enabled our team members to experience this unforgiving and demanding environment and develop essential skills for ensuring success on next year’s Dakar rally.”

The Race2Recovery Dakar programme is a 31-strong amateur rally team, which includes members who have been severely wounded in the line of duty, driving four Qt Wildcat rally-raid machines. The Dakar is a 15 day 5000 mile event through Peru, Argentina and Chile starting this coming January. Everyone here at 4×4 Magazine wishes the whole team the very best for the event. We will of course be carrying a full report of the event in our March issue.