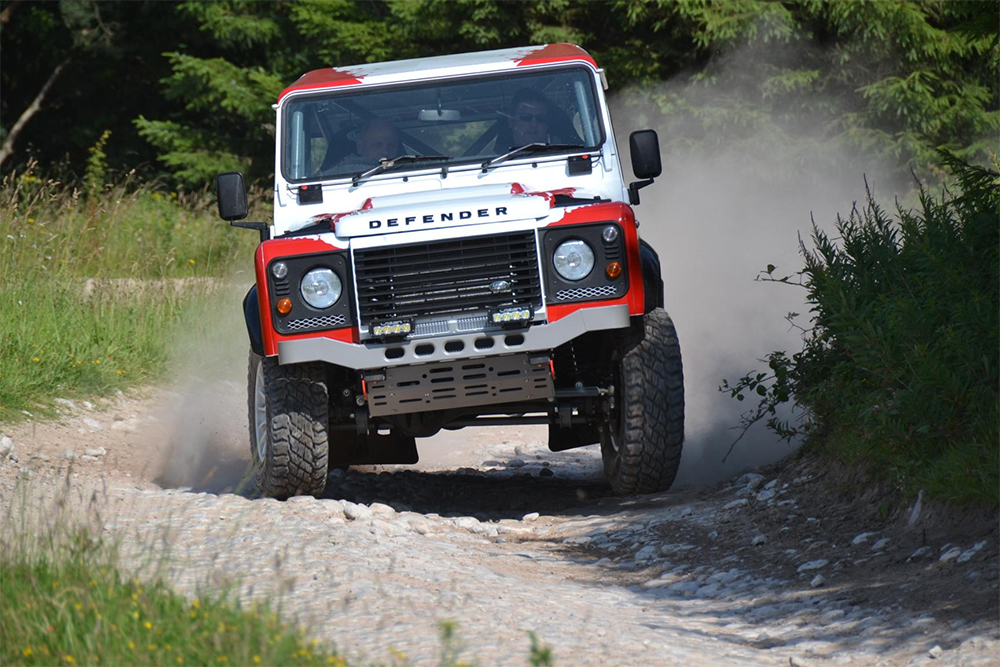 This weekend the 2015 Defender Challenge continues with the AWDC Allisport Hill Rally at Walters Arena near Swansea, Wales. Round three will see an exciting addition to the start line in the form of a new Bowler-modified, V6 supercharged powered Defender 110 opening up a new race class within the Defender Challenge for 2016.  Walters Arena will set the stage for an initial shake-down following the vehicle’s in-house development at the Bowler headquarters in Belper, Derbyshire.

Having demonstrated its unrivalled capability and relentless durability, the production-based 2015 Defender Challenge 90 has delivered impressive results, out-performing traditional rally cars in a David and Goliath style contest of agility, versatility and robustness.  Building on this success, Bowler has developed a standard Land Rover Defender 110 Double Cab Pick Up with a host of technical revisions specifically designed to prepare the car for hill rallies and international rally raids and is set to race next year in an additional ‘Class Two’ of the Defender Challenge.

On Saturday, Bowler Motorsport Managing Director, Drew Bowler, will drive the race-spec Bowler supercharged V6 Defender, still in development phase, among Defender Challenge entrants for its first race evaluation. The Bowler 3 litre supercharged V6 Defender 110 has an 8-speed automatic transmission, is tuned to produce  400hp and can reach 60mph in under 6 seconds.  All powertrain and rally-specific revisions have been introduced to create a vehicle with the power, durability and stability necessary for participation in endurance races such as the Dakar Rally and the Africa Race which take in extreme environments and conditions.

Drew Bowler said, “Since its launch, the Defender Challenge has given us opportunity to really explore the boundaries and potential of the Land Rover Defender and it has taken everything we’ve thrown at it. The Bowler V6 Defender is all about the continuation of the Defender Challenge and gives us an opportunity to take on international race events that require a bespoke engineering solution. This weekend, we take the vehicle into a race environment for the very first time, it’s an important and exciting moment for us.”

Continuing his own development story is Defender Challenge competitor Brian Palmer who entered the Defender Challenge this year alongside a number of retuning teams. As a newcomer of the Defender Challenge family, Brian enters round three this weekend with a steely focus and wilful determination, “I am excited about this round as I’m learning a lot about technique as the season goes on and I’m keen to put what I’ve learned into practice. This weekend, my strategy is to focus on getting a strong start and pre-empting the challenges the course presents. The great thing about the Defender is that even if I get it wrong, the car will shrug-off any driver error.”

The course is set over a challenging combination of fast gravel stages, forest climbs and sections of rocky terrain and is set to be the backdrop of some highly competitive performances as battle commences for the top four slots at the top of the table.