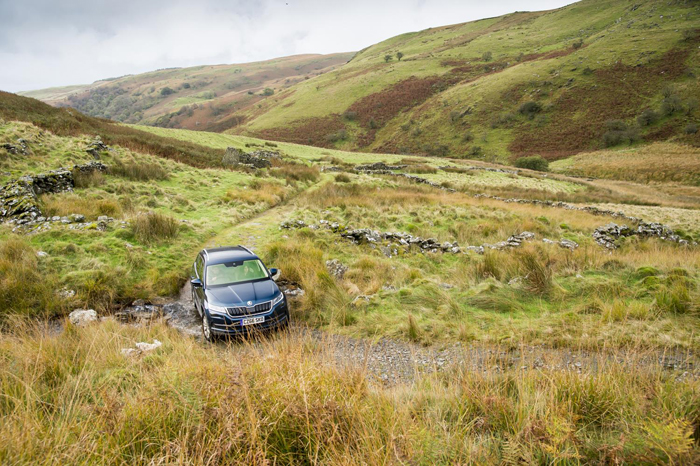 British parents spend almost nine weeks* of their lives ferrying kids to and from the school gates, according to new research** from ŠKODA. And for many – over a third (36%) of UK mums and dads – the ‘school run’ is the most stressful parental duty that they undertake.

However, whilst traffic (64%) is the most common obstacle facing people on their daily commute, spare a thought for those living in the most remote parts of the UK. According to ŠKODA’s study, in the furthest flung places such as the Scottish Highlands and Welsh Valleys, delays to school runs caused by hazards such as flooding rise by as much as 18% against the national average (56% vs 38%).

Livestock on the roads also causes issues. In the county of Sutherland in the far north of Scotland, and in the mid Wales county of Ceredigion, an average of one in ten parents regularly has to stop to bypass rogue sheep and cattle – almost twice as often as any other rural location.

On the back of these figures, ŠKODA sought out the country’s ‘most extreme school run’ – a nationwide search for the family facing the toughest terrain and obstacles – to put its brand new large SUV, the Kodiaq, through its paces in the UK for the first time.

Step forward the Joneses, a farming family based in Pontrhydfendigaid, Ceredigion, Wales.

Nestled amongst stunning picture-postcard scenery, the Jones’ land even features its own waterfall. However, despite beautiful appearances, their location also offers up problematic driving obstacles than cause the family delays of anywhere between ten minutes and two hours.

Dad William often has to use his chainsaw to help remove fallen trees, whilst ice and floods also present regular challenges – with a broken-down lorry blocking the road for two solid days last year. The Jones’ cottage, Cwmmoiro, sits within its own micro-climate, meaning it can be snowing at home when it is raining at the children’s school.

Mum Sarah Jones explained: “Every day when we wake up we don’t know what we’re going to come up against on our school run, which is part of the fun of living up here really. We could take our horse Willow, but a 4×4 makes things so much easier.”

Prior to its secretive arrival in Wales from the Czech Republic, the seven-seater ŠKODA Kodiaq had completed over a million miles of testing in some of the most extreme climates around the world. In what was a typically wet and windy day in Pontrhydfendigaid, that testing was the perfect preparation. The Joneses got to experience the Kodiaq’s outstanding 4×4 functionality, cutting across the valley via a slippery off-road route that features lots of mud and water crossings.

Sarah Jones concluded: “We were hugely impressed with the Kodiaq and our journey to school was the smoothest we’ve ever experienced. It tackled flooded areas and hills with ease and we enjoyed the headroom and nice little extras such as the heated seats. The seven seats would definitely come in handy for collecting our children’s school mates and when they’re not being used, we can pop our dogs in the back. The kids really want us to buy one now!”

Arriving in 2017, but available to order from November 2016, ŠKODA’s first ever seven-seater SUV will start from just £21,495 (OTR), and will be available from launch in four trim levels with five engine options, two and four-wheel drive, and a choice of manual or DSG gearboxes. Find out more at www.skoda.co.uk

**ŠKODA carried out quantitative research with Censuswide on 2,000 UK parents who complete a daily school run