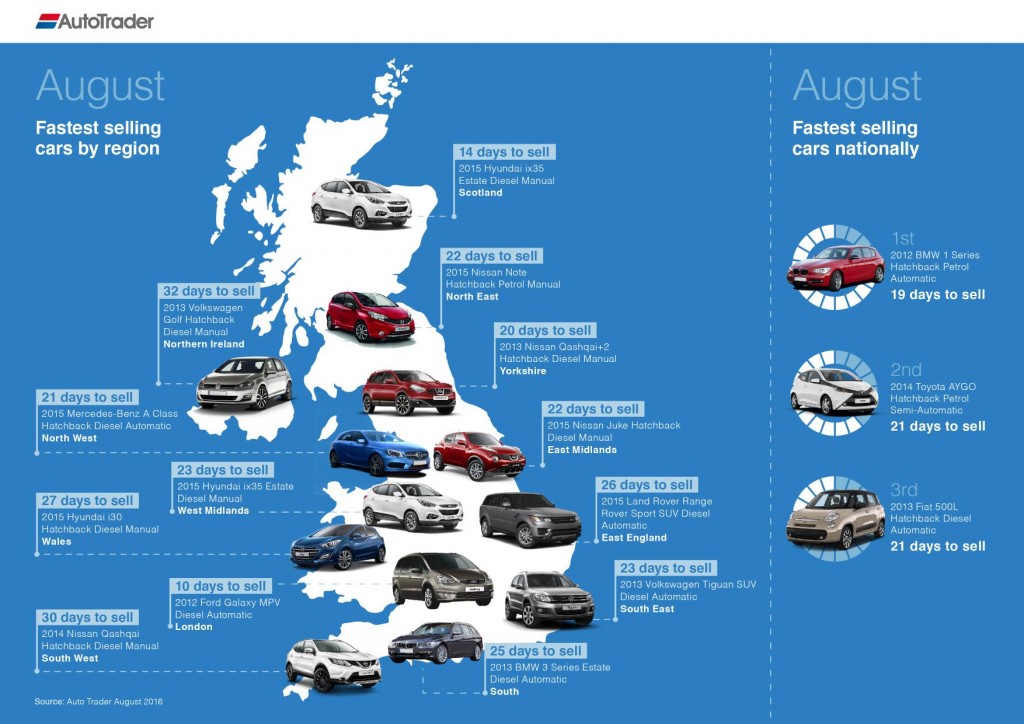 The BMW 1 Series was the fastest set of wheels off the UK’s forecourts in August.

The 2012 premium hatchback proved a big hit with buyers and in this petrol automatic guise took just an average of 19 days to sell.

Taking second spot is a regular visitor to the UK’s fastest selling cars, the Toyota AYGO. The 2014 model with petrol engine and automatic gearbox took 21 days to find a buyer and this is the fourth time this year the compact city car has made an appearance in the UK’s top ten quickest selling cars.

Meanwhile the Fiat 500L, the larger five-door version of the popular urban runaround, pops up for the second time in the nation’s rapid sellers to rank third. The diesel automatic version took 21 days from forecourt to buyer – the same time as the Toyota AYGO.

It’s Crossovers, however, that dominated the sales charts in August taking five of the top ten spots nationally and were the quickest sellers in seven of the UK’s regions.

Nissan’s Qashqai continues to prove popular as a used buy and makes frequent appearances in the UK’s and regional’s monthly fastest sellers. It’s the rarer seven-seat model, the Qashqai+2, that ranks as the fifth fastest selling car in the UK and takes first place in Yorkshire. The standard five-seat model found was changing hands quickest in the South West and ranked ninth nationally.

The SMMT new car registration data for August echoes the UK top ten fastest selling used cars as the Nissan Qashqai is the tenth most popular new car. What’s more, the new car registrations ranked the Ford Kuga as the ninth best-selling model in the UK. It’s a 2015 Kuga with petrol engine and manual gearbox that ranks as the tenth fastest seller in the country taking 25 days from landing at the showroom to finding a buyer.