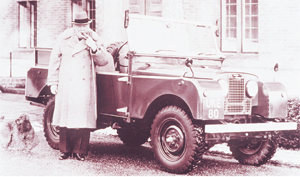 THE LAND ROVER SERIES 1, built for Winston Churchill’s 80th birthday, has been sold at auction for a stunning £129,000. It seems the vehicle had been sitting in a shed in Kent since 1977 and was expected to fetch around £60,000, but one – anonymous – bidder was prepared to pay more than double! The 1954 Series 1 was sold with only 12,932 miles on the clock and with the original logbook, registered as UKE 80, in the name of “Rt Hon Sir Winston Spencer Churchill KG. OM. CH. MP. Chartwell, Westerham, Kent”. It had been modified for Churchill with an extra wide passenger seat and a heated footwell to keep the country’s most famous ex-Prime Minister warm as he was chauffer-driven around his Chartwell Estate. Here’s hoping that, while the owner obviously wishes to remain anonymous, the vehicle still manages to make it to a few shows over the coming years as there are a great many enthusiasts that would love to be able to see the vehicle up close.