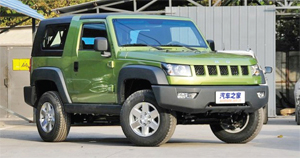 Across the globe from Los Angeles in the rather less glitzy Guangzhou Motor Show in China, SUVs were the most important new models. Indeed the influential China Car Times reported that the country was experiencing an ‘SUV boom’. One of the interesting new models is the Beijing BJ40 SUV, which they reported ‘has more than a casual look of the Jeep Wrangler’. The show also has the new Honda Urban SUV concept and Great Wall’s Havel H2 – the latter is thought to be coming to the UK. Honda’s Urban SUV concept was also shown at the Tokyo Motor Show and will be called the Vezel in the Japanese market. It is likely to be launched in the European market in 2015.

To emphasise this boom, Land Rover reported that October sales in China were 59,000 units, which is an increase of 15 per cent over the same month in 2012. There are currently 130 Land Rover dealers in China, and the company plans to expand this to 223. The scale of this market is hard to fully comprehend, but certainly underlines that it is boom time for SUVs across the globe.