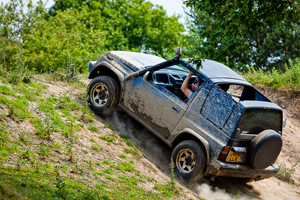 After the disparaging description of 4x4s being ‘Chelsea tractors’, it is interesting that extreme, outrageous modifier, Kahn Design has launched a new range of ‘expedition vehicles’ under the brand name the Chelsea Truck Company. First model to come from this is the Wrangler. If we were concerned that the latest Wrangler in ‘stock’ format had gone rather too bling for some tastes, you haven’t seen anything yet! The claret red leather interior is striking, and the 18 and 20in matt black wheels dramatic.

The conversion also gets a targa roof. The man behind all this, Afzal Kahn actually owns a Wrangler, which he keeps in the Lake District. Because of his enthusiasm Kahn has declared: “This is only the beginning, we will introduce a range of vehicles over the coming weeks and months ahead.” While the Kahn Range Rover conversions are not always to our taste, there is a sinful side that actually looks forward to see what they come up with next!