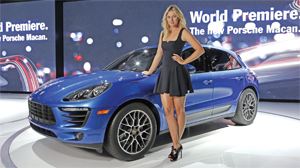 When Porsche unveiled its Cayenne SUV back in 2002, it was attacked by know-all doomsayers from all sides. Some thought the sports car company was selling its soul to produce an SUV, and those of four-wheel drive persuasion merely shrugged and muttered that it was so ugly, no one would want one. How wrong they all were. In the last 10 years, the Cayenne has become the best-selling model in the entire Porsche range. In the US alone, despite being Porsche’s biggest export market for its sports cars, an amazing 60 per cent of all sales are now for the Cayenne. It’s not surprising, therefore, that at the launch of the new Porsche Macan at the Los Angeles Motor Show last month, USA Today announced that Porsche had become “an SUV factory that happens to also sell sports cars”. How things have changed, and where, we wonder are the ‘it’ll never sell’ critics of the original Cayenne?

The new Macan is not actually a surprise and it has been known that this ‘smaller’ compact SUV was coming for some time. You won’t need to be an expert to be able to spot it when you see it on the road. The initial Cayenne was indeed somewhat nasal with the front trying to be a design copy of the sports cars and looked clumsy as a result. Not great at first, but follow up versions have softened this front design and most agree that the latest Cayennes are far better looking. The Macan has benefitted from this and cannot be accused of being ugly. The name is apparently from the Indonesian word for tiger, and sounds pretty good to us. Unfortunately the launch publicity material then includes the kind of verbal garbage that makes you wince: ‘the Macan really does live up to its name: powerful and ready to pounce at any time, yet light-footed and tenacious on off-road terrain.’ No it isn’t.

Porsche doesn’t need to use trivial hyperbole, because the company has the history to support the claim that ‘the sporting all-wheel drive car is ultimately a Porsche invention’ since Ferdinand Porsche built a race car with four electric wheel-hub motors back in 1900. The Macan is an unabashed sporting compact SUV, as you would expect. More surprising perhaps is the fact that the Macan has an ‘off-road mode at the touch of a button.’ This can be selected at speeds up to 50mph and switches to a traction-orientated off-road programme, which alters the torque-split to the four wheels, the clutch tensioning, and accelerator pedal response. This mode also increases the ground clearance by 40mm, thanks to the air-suspension, giving the Macan a maximum ground clearance of 230mm. It also activates the Porsche Hill Control that controls downhill speed from between 3 – 18mph.

Of course, it’s the sporting aspect that will sell this vehicle and the Macan will be available with three engine options; 3.0-litre V6 bi-turbo (340bhp), 3.0-litre V6 diesel (258bhp) and the top of the range 3.6-litre V6 bi turbo (400bhp). Some 50,000 Macans are due to be produced each year at Porsche’s new production line at Leipzig, the company emphasising this is a ‘Made in Germany’ product. The chassis and some running gear are based on the Audi Q5 (Audi being part of the parent company, VW) but the company is adamant that some 70 per cent of the Macan is pure Porsche. The new Macan will be available from April 2014 and prices range from £43,300 to £59,300, which will put it into a very interesting battle with a number of other compact SUVs. If sales go as expected, you have to say that the American newspaper’s claim that Porsche is now an SUV manufacturer that side-lines in expensive sports cars starts to make sense.