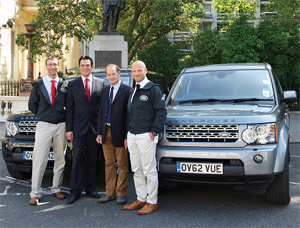 This is the latest challenge for Ben who has been leading polar expeditions for more than a decade and skied solo to the North Pole in 2004, where he still holds the record for the longest solo arctic journey by a Briton. He has been a brand ambassador for Land Rover since 2008 and the Scott Expedition, which starts at the end of October, is being sponsored and promoted by the manufacturer along with technology co-partner, Intel.

“There is a common misconception that everything’s been done in Antarctica, but what fascinated me for years is that the reality is very different,” said Ben at the Scott Expedition briefing at The Traveller’s Club, London. “In an age where Antarctica is increasingly in the spotlight and increasingly accessible to tourists, one of the most iconic journeys in polar history remains unfinished. The Scott Expedition will be the first time it’s been attempted, let alone completed, since the Terra Nova expedition more than a century ago. In terms of sheer human endeavour, Captain Scott and his team set the bar so high that their achievement has never been surpassed.”

As well as financial and logistical help, Land Rover supplied Ben with two Discovery 4s. These were used during extensive training exercises to remote bases on the Isle of Skye and in Greenland, with the latter being the final dress rehearsal – and the last chance for Ben and Tarka to make sure they can tolerate each other’s company cooped up in a tent! Mark Cameron, Brand Extension Director for Land Rover said: “Ben was given a choice and he chose the Discovery due to its comfort and versatility to carry the kit he requires and its capability to go anywhere. Ben epitomises the values of Land Rover, the spirit of adventure and performing in all-terrain, so we always knew we’d support him for his next big idea.”

Ben and Tarka will be sending back daily updates, blogs and photos from their tent which can be seen on www.scottexpedition.com. The expedition will also have its own You Tube channel: www.youtube.com/scottexpedition