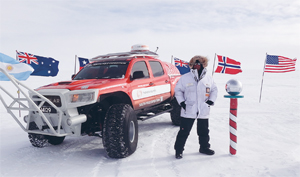 While we were struggling with Christmas trees, buying unnecessary presents and unwanted Brussel sprouts, some four-wheel drivers were breaking world records – in Antarctica. Regular readers will remember our feature in the September issue on the amazing Polar RTV. We drove the mighty beast (based on a Toyota Tacoma pick-up) at Brands Hatch, a slightly incongruous venue for a machine designed to be the fastest, motorised vehicle to reach the South Pole, unsupported. The intention had been to arrive at the Pole exactly 100 years after the first man to do it, Norwegian Roald Amundsen. The weather gods and a broken wishbone put paid to that, but driver Jason De Carteret and engineer Kieran Bradley made repairs, tried again, and still managed to break the record and travelled from Union Glacier, Patriot Hills, to the South Pole in an astonishing 39 hours and 54 minutes. That absolutely smashed the previous record of two days 21 hours and 21 minutes, by over 29 hours. Amundsen had taken some 56 days to do a similar trip…

If that all sounds simple, it certainly wasn’t. The first attempt had been thwarted when the Polar RTV went over a relatively small ice bump only for the front left wishbone to break. Since this was not a particularly savage ice hump, this was put down to a freak component failure. The vehicle had to be towed back to the start by one of the tractor trains that work down there. It was then a case of sourcing a replacement wishbone (or rather two, as Jason sensibly wanted to replace both sides). Logistics here are quite mind-boggling, but the new wishbones were sourced by Sparks Toyota in Miami, and personally delivered via a Russian Ilyushin transport plane a few days later. Kieran then had the fun of replacing the wishbones. Don’t forget that there was no garage here, this was done ‘al fresco’ with the wind howling and the temperatures down around the -19degC. Can you begin to imagine how cold spanners must be in Antarctica?

Kieran also fabricated some metal guards, which he also fitted to protect the wishbones – this guy’s day job is working for Lotus in Norfolk, but nothing could have prepared him for all this. The second attempt seems to have gone perfectly, the Polar RTV getting to the South Pole in this amazing World Record time, the supercharged 4.0-litre Toyota V6 engine (which was running on biofuel) never missed a beat. The whole project was financed by international information technology company, Thomson Reuters, who are to be complimented for supporting all this. The next step is for the team to drive back to base, and then wait for the air transporter to ship men and machine out of Antarctica. Part of the deal permitting adventures like this is that you take out everything that you take in, and we do mean everything. Hopefully, Polar RTV will appear at shows and exhibitions in the coming year, if it does, go along and check it out. World record-breaking Toyota pick-up? You had better believe it. Well done Jason and Kieran from all of us at 4×4 magazine – Roald would be pretty impressed we’re sure!

You can still see images and video clips of this extraordinary expedition by going to: http://expeditiontothesouthpole.com