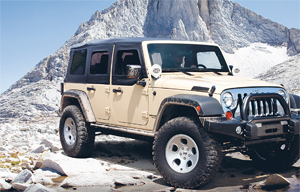 THE FIAT AND CHRYSLER partnership continues to develop, and the latest news involves the establishment of a massive global parts business for all the marques involved, under the Mopar banner.

Well-known in the US, Mopar is certainly not a household name in the UK, and even less so in Europe. The history of the company is an interesting one. A meeting of the amazingly titled Chrysler Parts Corporation’s Activities Council, back in 1937, established the Mopar trade name to market antifreeze; taking the MO from motor and PAR from parts apparently! Reputations were fully developed, however, when Mopar moved into performance parts, modified engines and the American ‘muscle car’ movement. To many American car enthusiasts in the UK, ‘Mopar’ and ‘muscle’ are synonymous. Indeed there are over 400 Mopar clubs across the world.

For serious Jeep enthusiasts, the Mopar name includes the fantastic range of hardcore off-roading parts. The exclusive Jeep concept vehicles that we featured in our August issue were all produced from extensive use of the Mopar parts catalogue. Given the Fiat/Chrysler partnership, it is logical that the new union should have a global parts business. Logical yes, but surely a logistical challenge of global proportions. Take the bald figures, for example: it covers 120 countries, a product line of over 500,000 parts, involves more than 350,000 daily order lines and is all supporting an estimated 70 million vehicles across the world. And that’s before you add the intangibles of mixing the Italian and American cultures.

The project is being driven by Mopar’s urban and personable President and CEO Pietro Gorlier who spoke to 4×4 Magazine about the programme, and it could prove to be good news for Jeep enthusiasts, with more of those exciting parts and accessories becoming available in the UK: “We are working to homologate parts for the UK and Europe. Many of the parts need homologation to be legal, but we will be homologating what we can.” He did, however, have a few words of understandable caution when he told us: “There are different rules and regulations between the US and the UK. In the US when someone goes off-road, they really go off-road. It is not the same in the UK and Europe. We will probably never have as many off-road accessories available for the UK as the US as the sizes of the markets are so different.”

The economies of the scale of the two markets are of course obvious. However, if this new Mopar global parts business opens up even a few catalogue pages to the UK Jeep enthusiast, then here at 4×4 Magazine we applaud the development and wish Fiat and Chrysler good luck in making it all work. It seems that Mopar engineers are even looking at ‘performance off-road parts’ for the new Panda 4×4, which in itself is an interesting development. Our First Drive of the Panda 4×4 is on page 22. It would benefit from a bit of Mopar ‘muscle’ being added…