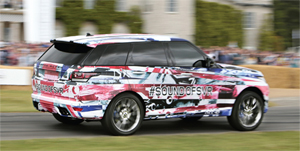 The new centre will be led by Paul Newsome, Director of Special Vehicle Operations, who arrives at JLR from Williams Advanced Engineering and he will be based at a new dedicated technical centre. There will be no less than 150 technicians at the centre, working to offer ‘a halo of vehicles ranging from high luxury to extreme performance.’

The emphasis here will be on bespoke and personal commissions, not quite the same as the company’s original special vehicle operations that produced commercial conversions for Land Rovers as fire tenders, field ambulance and the like. However, besides the new Special Operations operation a new heritage vehicle workshop will be created at Browns Lane in Coventry. This is actually the original home of Jaguar, and it will be the site for the recently announced production site for the six lightweight E-Type sports car recreations. It is hoped that this centre will also look at Land Rover heritage specials in the future. We await future announcements from both the Special Operations and heritage centre with great interest.