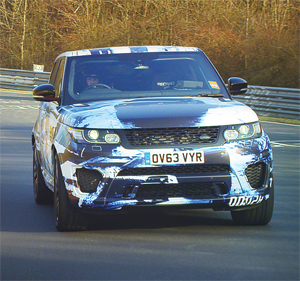 This year’s Festival of Speed at Goodwood saw the introduction of what you might think was a somewhat incongruous new model. For those that don’t know, the Festival of Speed highlights all that is great in global motorsport, with a strong leaning to classic motorsport hardware. This year, however, one of the stars was a Range Rover Sport SVR, the fastest and most powerful production Land Rover ever produced. A highly camouflaged version of the SVR, delivered some 542bhp up the famous Goodwood hill, in the ‘First Glance’ class – nothing much to do with classic motorsport but certainly a clever way for the Festival of Speed organisers to get high profile manufacturer support and publicity for the event – well it’s made it into the pages of a 4×4 magazine, so it obviously works!

The model is the first to come from the company’s recently announced Special Operations department, but it will be built alongside the ‘standard’ Range Rover Sport models, and will be available through the normal dealership network. Full technical details of the SVR had not been announced as we closed for press.