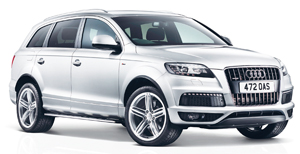 A new version of Audi’s Q7 has arrived which the company claims will now be capable of returning 39mpg. The new Audi Q7 3.0 TDI S line Plus has the lower output turbodiesel engine first seen in the A6 saloon. This unit produces 201bhp (as compared to the 242bhp of the existing 3.0 TDI versions) while still providing an impressive 332lb ft at a lowly 1250rpm. The claimed 39.2mpg equates to a CO2 output of 189g/km.

As you would expect, there is a very long specification list which when chosen will add significantly to the on the road prices which range from £39,995 to £49,120. The model shown here is the lavish S line Plus specification model.