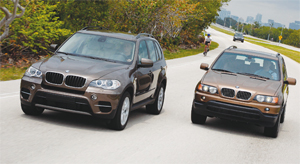 After eleven years, one million BMW X5 models have been sold. The anniversary edition, a sapphire black metallic BMW X5 xDrive35i featuring cinnamon brown Nevada leather trim, came off the assembly line at the American BMW plant in Spartanburg/ South Carolina and is currently on its way to a customer in China.

Built in Spartanburg, the BMW X5 is now exported to more than 120 countries, with the BMW X6 also being produced there for export to the global market. Before the end of this year, production of the latest BMW X3 generation will start at Spartanburg.