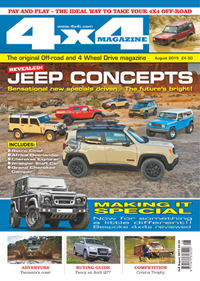 This is a particularly special issue; or rather, this is an issue of Specials. We are taking a look at the fascinating world of bespoke 4x4s, built for those people who want, and can afford, something very different. Now, while taste will always be somewhat subjective, engineering and build quality is far more objective and there’s no doubt that the vehicles we are reporting about this month score highly with the latter. Maybe some of the models will upset the traditionalists, especially Land Rover fans, but to be honest, I quite enjoy doing that! Kahn Design’s long-nose Land Rover Huntsman on this month’s front cover looks just terrific to us, but maybe not to some members of the Series I Club!

We are also very pleased this month to be able to reveal the latest concept vehicles produced by Jeep, intriguingly produced by a group called the Jeep Underground. Although something that has been done before, this is actually the first time in the last few years that Jeep has released such a collection – an indication of its growing confidence, thanks to an impressive new collection of production vehicles. And for vehicles that have been called ‘concepts’, they are pretty close to being production realities, or at least special builds. Obviously the Renegade, Cherokee and Grand Cherokee models that we report on could be produced, as they are all based on standard vehicles with Mopar accessories, but even the more outrageous models all drive and work as they should. Even if you are not a great fan of military 4x4s, you have to say that the Wrangler Staff Car would put a smile on your face, although not perhaps a replica US Marine helmet on your head while driving it. The Search and Rescue Wrangler would make a lot of sense, and while the window-less Chief SUV is completely barmy, you must admit that it made you smile! Imagine cruising on a sunny day with the Beach Boys ‘Surf’s Up’ on the radio (younger readers need to check out iTunes, although for proper audio excellence it has to be the vinyl original).