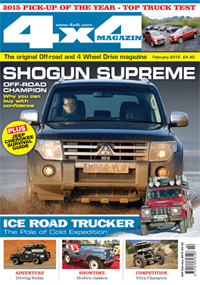 With the marvels of social, and regularly unsocial, media allowing what appears to be near instant global communication, it’s refreshingly traditional to be the Editor of a ‘paper’ publication. As it happens, this is being written two weeks before Christmas Day, yet if indeed anyone does read this, you won’t be able to until 2015 is a full 12 days old. Tradition you see, that’s what it is all about. A two day public holiday, only one of which has any religious significance, seems to cause such serious confusion in the magazine industry that we all complete our issues some weeks before they will be read, the digital files sitting in things called file servers slowly gathering static. It’s a tradition and I am all for it, probably more so as I age and gather my own covering of dust and static. You can tell when it’s happening; in my case, that process involves reading obituaries and finding them enjoyable, collecting vinyl records and looking on eBay for old Scalextrix sets, thinking how great it would be to race again…

This month’s feature on the Mitsubishi Shogun (see page 94) has a traditional theme as well. It’s a superb off-roader, people carrier, towing champion and complete all-rounder. So it’s a tad old-fashioned in its looks and has few whizzy buttons, sensors and magical electronic abilities. Does that matter? Our relatively more high tech Long Term test Freelander has recently been playing a fun game of do-you-trust-my-sensor? Apparently one rear tyre is under inflated, yet when checked appears fine. On one trip the warning light came on, yet as I was looking for a safe place to stop and check, it went out again. Good game, good game.

Of course, the Freelander is no longer to be produced in 2015, in its place is the Discovery Sport, and we will have our first full drive report next month (to follow the first impressions that are on page 10 of this issue). It’s a very clever vehicle, but did get me wondering. This month we have the latest report from a couple of our regular intrepid overlanders, Andrea and Rene, in their battered but brilliant Nissan Patrol, this time discovering the delights of the Republic of the Sudan. We also have the mad, mad drive in a Land Rover Defender 110 to the coldest place on earth, following the Pole of Cold expedition – you’ll want to put a warm jacket on before you even read that story. All these wonderful trips have one thing in common; they are only possible because of the four-wheel drive abilities of traditional off-roaders – just like the Shogun. Fast forward 10 years and you have to wonder whether a future Editor of this magazine will be reporting on such amazing travelling tales involving overlanders driving the Discovery Sport? Would anyone crossing a frozen lake or thrashing through a scorching desert want a vehicle with a sensor regularly telling the driver one tyre is losing pressure?