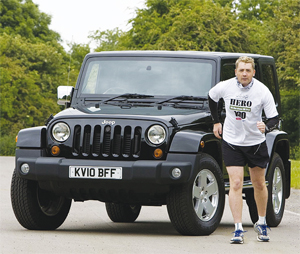 Mike Buss, the former soldier and World Record breaking endurance athlete, is taking the biggest challenge of his life, the ‘Hero 100 Challenge’ – 100 marathons in 100 days, and is supported by Jeep.

Until the 23rd September, Mike is running a marathon every day on a treadmill at 19 cities/towns in a bid to meet his £100,000 fundraising goal for Help For Heroes. Jeep will be transporting Mike throughout the Hero 100 Challenge, which will include the Royal International Air Tattoo, RAF Lynham and will culminate at the Leisure Industry Week at the NEC Birmingham – 23rd September.

This is no mean feat, but Mike, who has already broken over 40 world endurance records, is certain that he will smash the existing world record, 50 marathons in 50 days, out of the water.  Chrysler UK – a long term supporter of Mike and his fundraising challenges – has donated a Jeep Patriot as the top prize in a charity raf_ e that will take place when Mike completes his Hero 100 challenge.  Commenting on his Hero 100 Challenge, Mike said:

“This is an enormous challenge for me and one that I am very excited about starting. I would like to thank Chrysler UK for all its support, which will not only help me set a new world record, but more importantly it will raise those vital funds that are needed for Help for Heroes.” Visit www.facebook.com/ mikebussbeyondimpossible for more information. Good luck Mike!